In 2011 the choir initiated a concert series known as Daugavas BALSIS and this year the final concerts in this series will form a part of the choir’s 30th anniversary season. Daugavas BALSIS aimed to traverse the entire Daugava basin in Latvia on rafts, barges or other water transport vehicles over a number of years, performing free concerts in nearby churches, cultural centres, schools and outdoorvenues. To date the choir has performed 49 such concerts on both banks of the river Daugava. As part of Daugavas BALSIS, it will be possible to again hear the choir this year, from August 24 to 27, at one of 14 performances in the concluding stage of this series, which will take place at sites from Ogre to Rīga.

This year’s series will commence with a performance at the Ogre Evangelical Lutheran Church. The church can be found not far from the river Ogre, where the 2016 concert series concluded with a performance on the floating stage. Thursday's second concert will take place on the legendary St. Meinhard’s Island in Ikskile (if the water levels are too high, the concert will take place in the newly opened Ozolins Square). Later, audience members are invited to arrive by boat from both banks of the Daugava for the distinctive concert entitled Life Songs to be held on Death Island (Nāves Sala) There’ll be an opportunity for a limited number of people to be provided with transport to the concert from the Recreation Centre Ķīķerīši.

On Friday August 25 the first concert of the day will be at the Lower Lake in Daugmale (Lejas ezers Daugmale). This experimental concert will only run for 15 minutes. The choir will envelope the lake while the conductor will be on a temporary jetty in the lake. Later on, both banks of the Daugava will be connected through perfomances entitiled Summoning Through Song (Sasaukšanās), where the Daugmale folk ensemble will join the choir on the left bank at Daugmale Castle mound and the choir Lōja will be on the right bank in Salaspils at the memorial for the Livonian Leader Ako.

The morning of August 26 will begin at 11.00am with the concert, Rise up Higher, in an unusual setting for choir concerts, at the Riga Radio and Television Tower on Zaķusala. In the evening, at the former outdoor stage of Arcadia Park (Arkādijas Parks), songs from Song Celebration concerts will again be heard after a long break in such performances. One of the choirs' favourite Daugava BALSIS series traditions, is the late evening concert, which loosens the boundary between the choir and its listeners. The concert Evening at Smiļģis, in the garden of the Eduards Smiļģis Theatre Museum will be in this vein.

Sunday morning, August 27, will begin at the National Library of Latvia and will continue with a concert at The Small Guild Hall (RKTMC Mazā Ģilde), which is the home of the choir BALSIS. In order to achieve fully the goal of the seven-year concert series, just as the Daugava flows further into international waters, so too will the choir head into international waters, by boarding Tallink's Isabelle. It will head to neighbouring Sweden where in Stockholm BALSIS will combine with the Stockholm Latvian Choir to perform at the prestigious Eric Ericsonhallen Concert Hall (ericericsonhallen.se). This will be the second performance by the choir in this setting. The Swedish public has been acquainted with the Youth Choir BALSIS since 2012 through its successful participation in festivals in Lund and Örebro. The choir has also delighted audiences through its solo concerts in Västerås and Älmhult.

On August 28, BALSIS will present a two-part choir concert which will provide a musical insight into the classical Song Celebration repertoire, along with the quintessence of sacred and secular music by contemporary Latvian composers. The program will include the works of: Pēteris Vasks, Valts Pūce, Emīls Dārziņš, Juris Vaivods, Ēriks Ešenvalds, Rihards Dubra, Raimonds Pauls, Pēteris Plakidis and others. Listeners will also get a chance to take part in a singalong.

The concluding concert of the concert series Daugava BALSIS will take place on Tallink's ship, this time the Romance, on August 29.

As usual, each concert has a specially selected, unique program. Concerts in Latvia are free of charge thanks to the backing of counties, churches and supporters!

Daugavas BALSIS can be heard at:

11.00am RISE UP HIGHER, Latvian Radio and Television Tower, Zakusala

11.00am NATIONAL LIBRARY of LATVIA 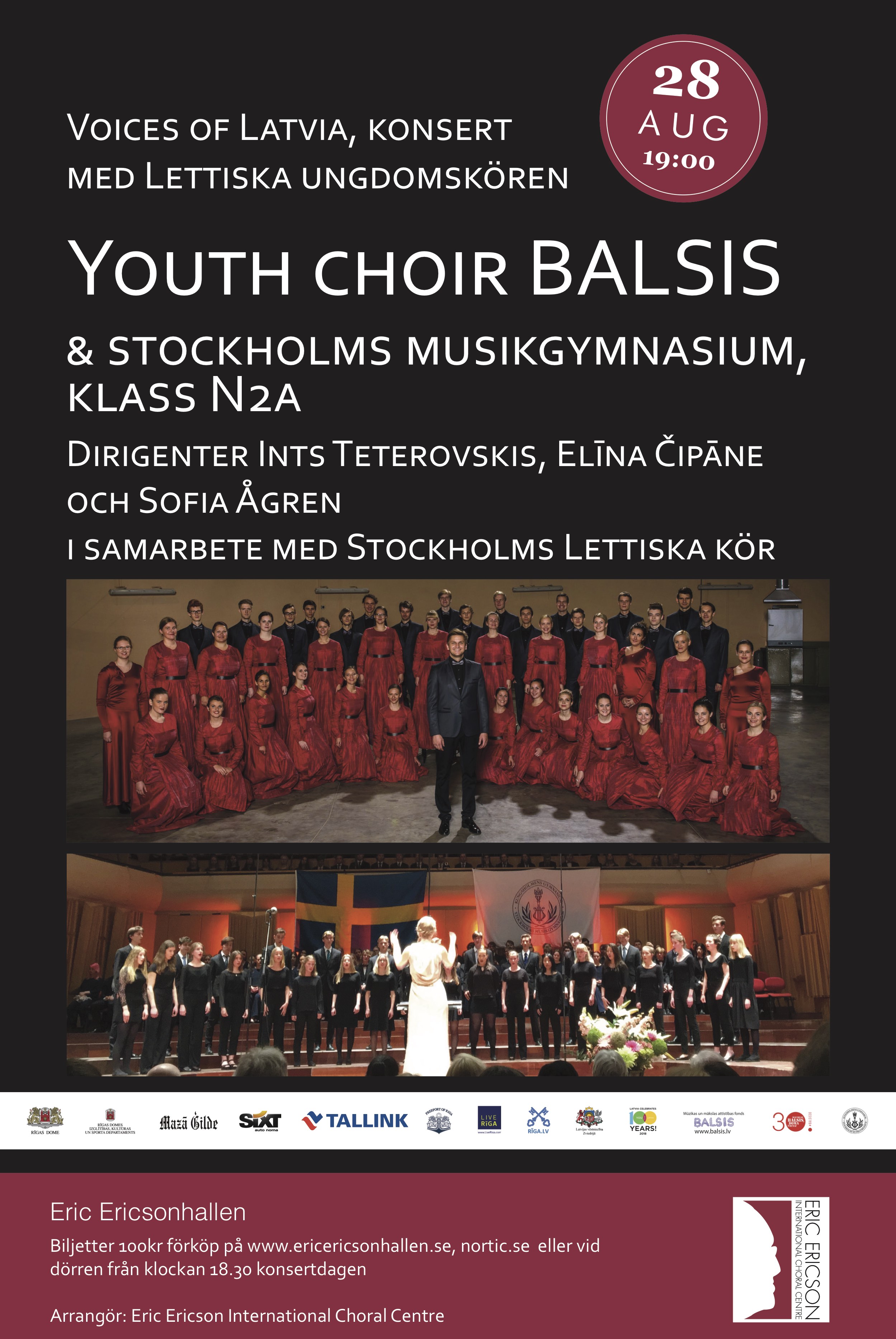 See you by the Daugava, or further afield, in August!